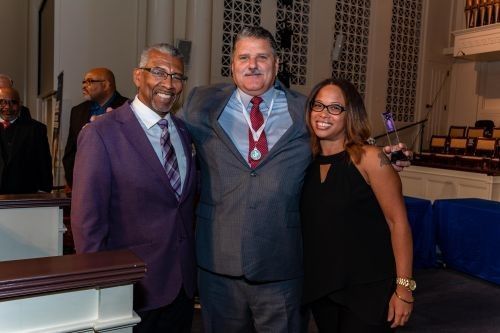 After eight years of marriage, Richard Fagan’s divorce left him feeling lost. He was struggling with the loss of his wife and a fallout with his church. Not knowing where to turn, he turned to drugs and alcohol. It felt like everything had fallen apart – his business, his family, and his faith family. He was living at the Orlando Union Rescue Mission when his life hit rock bottom.

“Freddy at the mission told me to check out Jobs Partnership, but I wasn’t sure,” Richard remembers. “I was not even planning to stay in Florida. I did not know anyone here, had no connections, and did not see a future in this place.”

But Freddy was right. Jobs Partnership served as a guide to Richard, helping him through a very difficult time. The leaders at Jobs Partnership quickly realized that Richard had so many skills to offer the marketplace. He was just missing a few important items. First, Richard had never created a resume. He had owned a successful plumbing business in the past and, as a business owner, a resume is not a necessity. But now, as he hoped to find a job, it was critical. Second, Richard did not know anyone in Florida. He was new to the state and he needed connections to make his life work. Finally, Richard’s plumbing license from New York was not accepted in Florida.

“They told me that I may as well throw that old license in the garbage because it was no good here.” Richard recalls.

Through the Jobs Partnership Program, Richard interviewed with AdventHealth. “My coach was the one who encouraged me to apply there,” Richard says. “I saw the word, ‘Maintenance’ in the job description and I wasn’t going to apply, but Lee told me to give it a shot and just see where it might lead.”

What a great piece of advice! Richard was hired as one of four maintenance workers and they quickly realized that his skills as a plumber and even his background in ministry could make a difference in their hospitals. Richard is now thriving at AdventHealth, a place where he has the opportunity to learn, grow, minister to patients, and have a purpose at work. Not only is he succeeding at work, but he spends his day off giving back to the Rescue Mission. He offers his services to them free of charge, helping others who find themselves feeling lost as he did.

Richard has found his way to a great job, a renewed relationship with God, a strong sense of purpose in life. Richard lost his way and Jobs Partnership helped him find it again.