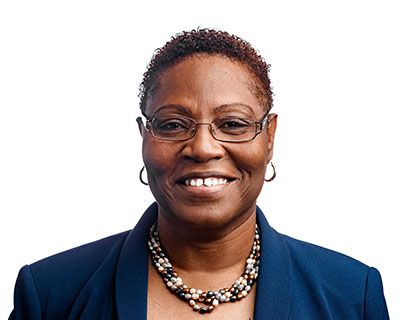 At the tender age of nine, family members began abusing Sharon and robbed her of her youth. At twelve she started drinking to forget, which led to a full-blown alcohol and drug addiction by the age of 21. Along the way, she had her first of four children at sixteen, coupled with a string of unhealthy relationships and frequent visits to drug treatment programs.

Sharon would disappear for weeks at a time, leaving her children under the care of her mom and sister. The low point came while living in a crack house and she asked God to rescue her from this destructive lifestyle. It was soon after that dark moment that a friend invited her to church at Agape Temple, where Pastor Earl Madison encouraged her to enroll in the LifeWorks training at Jobs Partnership. Throughout her years of struggle, amazingly, Sharon was able to find employment, so when her Pastor suggested JP, she thought to herself “what are they going to do, help with my resume? What good is that if I can’t keep the job?”

Sharon started attending the class and during the biblical lesson on Forgiveness, Pastor Outing crumbled up a $20 bill, stomped on it, and asked her if she still wanted that $20. With a resounding yes, he told her that she was just like the $20 bill – she still had value and that she needed to forgive the people that hurt her as a little girl. Freed from the guilt and shame she had carried for years, and with the help of her JP mentors and the career planning in the class, Sharon was able to pursue her passion for helping other women who had similar experiences to her and restore her relationship with her children. “I have to be the change I want for my family and I have to love me if I want to love others.”

After several years of working in health care, Sharon now works at the Jobs Partnership recruiting participants for the LifeWorks training and helping them overcome the barriers that keep them from pursing the life and work they were made for.