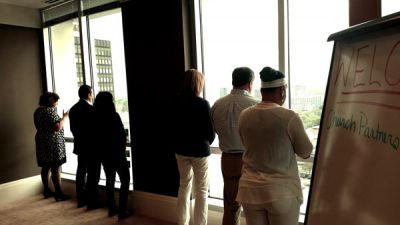 The Jobs Partnership has never been busier. Since its founding in 1999, the faith-based non-profit has been working in Central Florida to train, mentor and connect struggling men and women to resources, short-term training and employers in high-growth industries. The organization’s groundbreaking work is providing a duplicative process that gives people a second chance. In other words, its growth potential is almost limitless–but not without challenges.

In the Spring of 2015, The Jobs Partnership made the decision to revise certain aspects of what was then called their Life & Work program, the centerpiece of the organization’s offerings to the working poor. In addition to making changes to the course format and curriculum, the name of the program was changed to LifeWorks Training and a new logo was developed. The Jobs Partnership also created a Student Recruitment marketing strategy. Out of that strategy, a new brand architecture and new recruitment communications were produced. Their efforts certainly paid off: the classes became filled with qualified candidates from JP’s church and community partners, including their newest partner, OCPS Title I. Schools. In addition, new momentum was building within the organization and among its network of educational, community and employer Partners.

Along with this “Church Campaign” initiative, The Jobs Partnership embarked on development of a new Website and Content Library that’s now the organized hub of all communications and resources, with specific areas for each audience: Students, Churches, Volunteers, Community Resources, Employers and Financial Supporters. This has enabled the sharing of compelling stories and information about what The Jobs Partnership is doing—literally empowering everyone to be informed and promote the organization to others using simple, highly visual and mobile-friendly tools with one common message: “We Were All Made For This.”